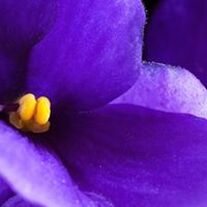 The African Violet Foundation (AVF) has been serving and supporting middle and high school students and their families in Southeast Iowa for over decade.

AVF was founded by Staci A. Wilson Wright and Roger Wright in honor of Staci's grandparents, John and Ava Topping. Although her grandparents had little money, her grandmother was well-known for sending African Violets to those in need. African Violets are inexpensive, but it was her Grandma Ava Topping's way of letting others know that she was thinking of them and that she cared deeply about them and the circumstances they were in.

While the foundation was born as an effort to carry on her grandparents' legacy of Christian care and concern and acts of altruism, the foundation has morphed into something Staci Wright never could have foreseen a decade ago. With a nine-member board, the foundation has continued to grow each year into so much more than she ever dreamed possible.
AVF is most widely known for their Christmas gift program for middle and high school students. This all began in December, 2005 when the first 33 students were served at Fairfield High School. Since then, over 500 middle and high school students in the Fairfield, Pekin and Van Buren Community school districts are being served annually at Christmas.

Over several years, the foundation sponsored a community-wide clothing drive and distribution called Caring Through Clothing. It was a community-wide clothing drive and distribution. Gently used clothes, new underwear, new and gently used socks, shoes, winter apparel, blankets and laundry supplies are collected throughout the year and distributed at no cost once a year on Black Friday, the day after Thanksgiving. Monetary donations also are accepted as Caring Through Clothing funds a washer/dryer grant for families in need. The first clothing distribution was held in 2012 and it concluded in 2019 as the AVF Boutique opened (see below).   It had been held annually since at the First Baptist Church in Fairfield, Iowa.

As one can tell, AVF is a non-profit organization that also serves and supports middle and high school students and their families in a myriad of other ways. We have board members in both buildings who take kids and families shopping. We’ve purchased fabric for kids in Family and Consumer Science (FACS) classes who need it. We’ve purchased other supplies that kids have needed for school. We provide PE clothes and shoes for high school students who need them. We are constantly collecting and distributing clothes, and household items when we learn of families in need of these. We make sure students experience prom, homecoming and other school events.

The foundation is supported in part by Agri-Industrial Plastics in Fairfield, Iowa. When now retired employee and former at  Terry Neil learned about the foundation, he made it his personal mission to involve everyone at the factory in helping students and families in need. The corporate support that has evolved from Terry's "gentle" yet persistent persuasive techniques led to the company's sponsorship of an annual golf tournament. All proceeds of the golf outing and silent auction now benefit the AVF. At Christmas, Terry plays Santa, personally seeking donations from every single Agri-Industrial Plastics employee. His efforts have made the company the largest corporate sponsor of the foundation.

The foundation also benefits from the support of many other local businesses, service organizations, and community members who have personally adopted AVF as a cause close to their own hearts. The community support of both of AVF's major service projects has been nothing shy of phenomenal.

The AVF Boutique, located at 54 S. B Street, Fairfield, Iowa, opened for business in January 2020!  This three year project was funded by donations and fueled by love of the cause.  Volunteers worked hard to completely gut and rebuild the entire space to create a warm, cozy, comfortable place for people in the community to obtain no-cost clothing.  The gently used clothing is donated by caring individuals as well.  It is laundered in the amazing Dexter commercial washer and drier that was donated by Dexter Laundry before being placed in the store. Click on the "AVF Boutique" tab above for more details regarding the store.